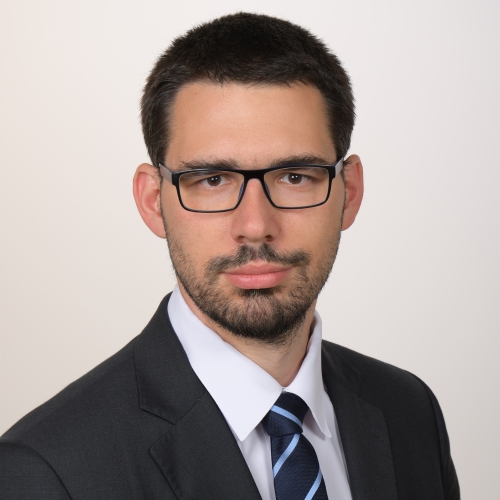 Polish and European (EQE 2013) Patent Attorney.
Marek Bury graduated as M.Sc. Eng. in 2004, at the Faculty of Electronics and Information Technology, the Warsaw University of Technology, having major of Information Technology, Automation and Robotics, Electronics and Telecommunication, and an additional profile of Telecommunication – Electroacoustic and Television.
In 2009, received (with honors) a degree of PhD in technical sciences for his dissertation entitled: “Microwave imaging based on multi-point acquisition of ultra-wideband signals”. Also in 2009, he passed final examination and was registered as a Polish patent attorney under a file number 3261.
His dissertation was granted the third award in the national competition for the best dissertation in the field of radio communication and multimedia technologies, and an individual 2nd degree award of the Rector of the Warsaw University of Technology for scientific achievement in 2009. Since 2010, he has simultaneously worked as a patent attorney for a large IP firm and as an Assistant Professor at the Warsaw University Technology.
He has participated in a number of scientific and R&D projects concerning a wide variety of issues related to radioelectronics, including standards of digital television, localization techniques, microwave imaging, radar systems, antennas and emergency management systems using robots. He has attended Government aided programs aimed at the strengthening of relations between science and industry.
In 2013, his name was entered in the list of Professional Representatives before European Union Intellectual Property Office (EUIPO, former OHIM) and after having successfully passed the European Qualification Examination in the list of professional representatives before European Patent Office (EPO). In a view of meeting requirements set forth to represent before Unified Patent Court in 2017 he completed master degree in Law.
He deals mainly with the cases concerning patents, particularly in the field of electrotechnics, mechanics, telecommunication and information technology. He is an author and co-author of approximately 30 scientific publications concerning radioelectronics and 5 works concerning industrial property. He is a member of the IEEE. He provides advice regarding optimal IP protection and assistance in patent and UM drafting, prosecution and litigation as well as invalidation of inaccurately granted patents and rights under utility designs.
Marek Bury is interested in the mechanisms of commercialization of the results of scientific results; he is a graduate of the programme implemented by the Ministry of Education and Higher Education Top500 Innovators Science, Management, Commercialization, and a member of the association of graduates of this programme.